It looks like all systems are go for Chinese billionaire Tony Fung in his plan to build an A$4.2 billion casino and resort in Cairns, Queensland that is expected to rival the mega-casinos of Macau. The project includes plans for a world class casino to be built around Yorkeys Knob along Cairns’ northern sands. The project also includes nine luxury hotels with 3,750 rooms, a sports stadium seating 25,000 people, an 18-hole golf course, 20 hectare reef lagoon and one of the world’s largest aquariums. 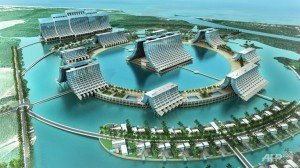 Queensland officials have put the project on the fast track. They designated the proposed Aquis Great Barrier Reef Resort as a “coordinated project.” This means it has an expedited approval path. The economic, social and environmental approvals will be governed by the state government’s coordinator-general office rather than done separately. The next government approval steps are for an environmental impact study followed by satisfaction of foreign investment guidelines.

The mega-resort could create as many as 9,300 jobs while it being built. The casino and other projects should provide 10,000 full-time jobs when operating, according to government officials, making the recently ballyhooed billion-dollar Barangaroo Casino under development by James Packer in Sydney, puny by comparison. Packer wants to attract Asian tourists with a casino and six-star hotel.

Fung is part of one Hong Kong’s most famous banking dynasties. He said he wanted the Aquis Great Barrier Reef Resort to be a “man-made wonder,” he said, rivaling those around Macau. This will draw Chinese tourists to Australia’s northern Queensland reaches, according to the developer. Fung said the casino and resort will be suitable for the unique Cairns region and allow Queensland to compete with other vacation venues for the valuable Chinese tourist dollar.

Not everyone agrees with Fung’s plans. The elected leader of the seaside community King of the Knob Jim Cadman said the vast size of the proposed project has “completely blown away and amazed” the town’s citizenry. Many local people viewed it as a threat to their jobs as well as the environment, he said, adding they ere prepared to fight the plans.

However, most government officials and business leaders are applauding Fung’s plans. Michael Trout, the Barron River MP, said the casino-resort would make Cairns an international trave destination again. Paul Williams, a local Griffith University lecturer said the plans were suspicious because they were being disclosed around election time, but auspicious because they could bring a huge number of tourists to the area. He said north Queenslanders should be excited even as they maintained a healthy. dose of skepticism.