You are here: Home › Poker › A Quick History of Craps

To learn more about the origins of craps, read on. 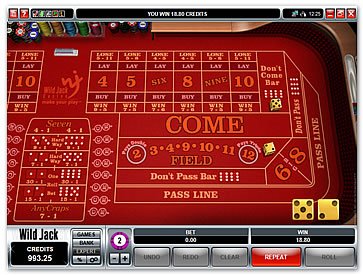 Craps is actually a derivation of an English game called hazard. The origins of hazard are somewhat murky, and some think the game may have originated during the Crusades. What is known is that the game was enjoyed by the European elite during the 18th century.

In the early 19th century, Bernard de Mandeville of New Orleans transformed the game of hazard into a simpler form. The French named the game crapaud, which is the French word for toad. This was an obvious reference to the toad-like motions of the players who played on a street or a floor.

The game was popular on riverboats which traveled the Mississippi River, introducing the game to other regions of the United States. Craps caught on quickly, and one possible reason for the game’s attractiveness could have been its susceptibility to the utilization of fixed dice.

The problem of fixed dice was eliminated by a man named John H. Winn. Winn redesigned the craps table by introducing the option for players to bet against, as well as for, the shooter. The new design of the table included an area for a bet known as the Don’t Pass bet. This new option rendered fixed dice useless.

One version of craps which became immensely popular was street craps. This style of craps was popular because it could be played almost anywhere, using a wall or curb as the backstop.

Players could also choose to play craps without using a backstop, as soldiers learned during World War II. Depending on where they were, the soldiers may not have had access to a wall, and certainly not a curb, to use as a backstop. So the soldiers were forced to improvise, and started using army blankets as playing surfaces. Not having a backstop led the soldiers to create methods of so-called “dice control.” Perhaps the most famous of these methods is known as the army blanket roll. The issue of whether modern-day players can use dice control to gain an advantage on the house is still hotly debated.

For more on the game of craps, visit www.dicesetter.com